Kingman Turquoise Concho Belt handmade by Adam Fierro. This fabulous belt features 9 concho slides with Kingman turquoise set in sterling silver with a concho buckle. Each concho measures 21/2″ inches in diameter. The total length of the belt is 57″  long but can be shortened on request. 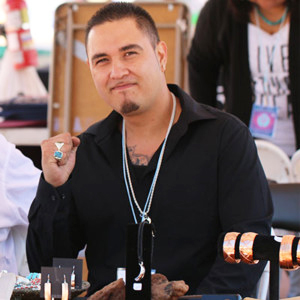 Adam Fierro was born in Gallup, New Mexico and is a descendant of the Santa Clara Pueblo and Mescalero Apache tribe. He started working with jewelry at the early age of six with his father and grandfather. He is a third- generation silversmith and jewelry artist. Fierro finds his inspiration from his Native American heritage and what the stone dictates. “Turquoise has a story, each and every stone,” say Fierro. “It chooses what it wants to be and I let it guide me.” His jewelry is a contemporary style with a bit of Southwestern influence and excellent craftsmanship. To own a piece of Adam Fierro’s jewelry is to own a work of art with a story unto its own.