Royston Turquoise Bolo made by the amazing Leonard Nez. This striking pendant features a piece of Royston turquoise set silver scrollwork made of heavy gauge sterling silver. The slide measures 2-3/4″L by 2-3/8″W and the tips measure 2-1/4″. The total length of the black leather cord is 43″L.

Royston is a district in Nevada consisting of three turquoise mines: Bunker Hill, Oscar Wehrend, and the main producer, The Royal Blue. Royston is known for its beautiful colors ranging from deep green to rich, light blues which are set off by a heavy brown matrix. The Royston mine is producing a little high grade turquoise today, operated by the Ottison family. They process most of their material into finished cabs and allow very little rough to come onto the market. This controlled output has raised the price of this material considerably in recent years. 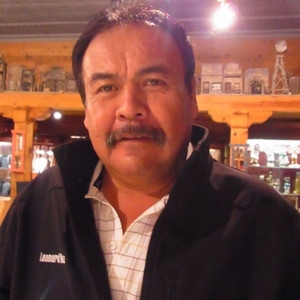