Silver Squash Blossom Necklace with each and every bead handmade by the young Native American artist, Trent Lee-Anderson. The center naja is set with a beautiful piece of Number 8 turquoise. The squash blossom measures 24″L and the naja is 1.5″. 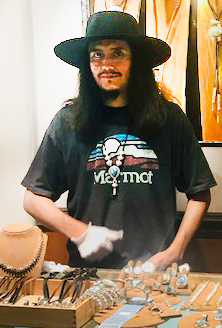 Trent Lee Anderson, twin brother to Kyle and younger brother to Wyatt, was born on January 12, 1993. His hobbies include skateboarding, hunting, camping, fishing, and hiking with his brothers. Ever since Trent was 12 years old, he has been learning the art of jewelry making from his well-known father Allison Lee. At a young age, he began winning several awards from SWAIA Santa Fe Indian Market in Santa Fe, New Mexico. In 2006, he won Honorable Mention, Youth Division, and in 2007 First Place – Youth Division. In 2008 he won First Place, Best of Division, Best of Classification – Youth Division. In 2010 he again won First Place, Best of Division, and Best of Classification in the Youth Division. In 2013, Trent came in first place overall in the necklace category at Santa Fe Indian Market, the most prestigious award as he was competing against all the well-known artists. In 2017, he won First in Division at the Heard Museum and also First in Division at the Indian Market, earning a Blue Ribbon. Trent is using his innovation to branch out from his well- known bead making to other pieces; such as bola ties, concha belts, and rings. Trent has been able to solely support himself through his art. He is a fantastic silversmith and has a very exciting future! 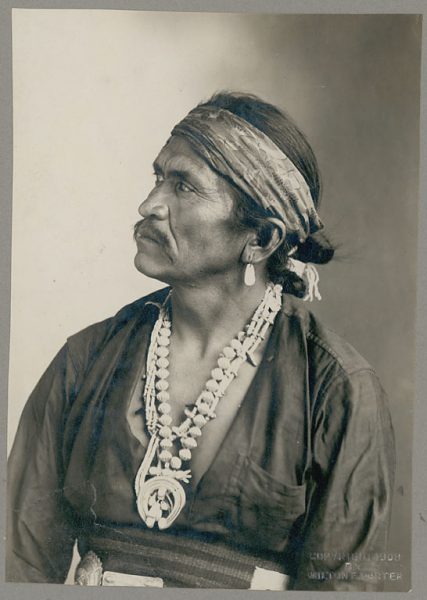 Located in the Lynn mining district (no. 19, pl. 1 ) in northern Eureka County, north of Carlin, Nevada, the Number 8 mine is on the west side of the Tuscarora Range in the NW 1/4 sec. 4, T. 35 N., R. 50 E., and was at one time a gold and copper mining operation. It was in a large mining district encompassing ten 20-acre claims and was active from the 1930’s through the early 1950’s. Host rocks for the Number 8 deposit consist of intensely altered quartz monzonite, shale, and thinly bedded black chert, which are complexly folded, faulted, and much altered. Turquoise is concentrated along quartz veins in the intrusive rock and along faults in the sedimentary rocks.The number 8 mine was presumably discovered about 1925 by a barber from Carlin whose name has been forgotten, because he made no attempt to mine the property. The mine was rediscovered by Earl Buffington and Lawrence Springer in 1929. They filed formal claim to the property and proceeded to mine turquoise in serious fashion, producing about 1,800 pounds of good stone the first year. In 1930 Ted Johnson bought Buffington’s interest and during the next four years produced about 5,000 pounds of commercial stone. In 1935 Doc Wilson bought the number 8 mine from Johnson but did nothing with the property and the claim lapsed. Myron Clark relocated the claim and, after working it for awhile, sold it to Lee Hand. Hand operated the mine for a short time, but became dissatisfied with the quality of the stone, and sold it to the five Edgar brothers who now own it. The Edgars extended operations and produced a considerable amount of fair-to-good turquoise.In 1950, as most of the visible turquoise had been taken from the workings, the Edgars hired a contractor with bulldozer equipment to remove overburden from another part of the claim. A deposit of copper had been found on the property, and the Edgars thought they might mine copper if they did not find more turquoise. The bulldozer, after digging a pit about eight feet deep and 80 feet long, uncovered a deposit of some of the finest spider-web turquoise ever found in Nevada. The deposit was mostly in nodules, some of gigantic size.One of the largest pieces of turquoise and matrix in the modern world, perhaps the largest nodule ever uncovered, was discovered at the Number 8 mine on June 23, 1954, by T. G. Edgar, J. M. Edgar, and Marvin Symes. This specimen was 33 inches long, 18.5 inches wide, and seven inches thick. Cleaned and polished it weighed 150 pounds. The nodule was of excellent texture, good color and hardness, and ranked with any turquoise of good commercial grade. Another nodule, of excellent quality, weighed more than nine pounds. It was sold to C. G. Wallace, of Zuni, New Mexico, for $1,600. The discovery proved to be a rather large-pocket and produced more than 1,600 pounds of the very highest grade turquoise before being worked out. Spurred by this find, the Edgars further explored the property, without finding any more spider-web turquoise of notable quantity. Other turquoise was discovered, however, of good commercial grade, sufficient to keep the mine in operation.Of the ten claims in this 20-acre area, the Number 8, first claimed by the Blue Star Company in Lander County, is considered the finest example of the gold-webbed turquoise.. The mine has produced one of the most prized spider web turquoise deposits in the world. In its prime, enormous nodules were found, including one that weighed 150 pounds. Number 8 turquoise is famous for its black, golden-red and brown spider web matrix background, which is set off by the soft blue to blue green turquoise. Only rarely does gem material appear: a very dark blue turquoise with black spider web matrix. The mine is now depleted and Number 8 turquoise is extremely rare and valuable.