Oxidized Sterling Silver Mixed Bead Navajo Pearls by Navajo Artist, Virginia Tso. This necklace features a variety of shaped beads; round, fluted, saucers and tubes. It measures 18″ and has a hook-and-eye closure.

Authentic Navajo Pearls are sterling silver beads made entirely by hand by Native American silversmiths. Handmade Navajo Pearls are hand-crafted by using heavy gauge sterling silver from which they cut, stamp, drill, solder, file, polish, and string. Handmade beads are very labor intensive, therefore much more expensive than bench made beads. Because each bead is made individually, there will be slight variations from bead to bead.

Sterling silver has always been a popular choice for jewelry because of the metal’s sparkling beauty and versatility. Since the dawn of civilization, men and women have been captivated by silver’s spell and splendor. Throughout the ages this mystical white metal has been used to mark historical milestones, celebrations, achievements and special occasions.

No one knows with certainty when the first silver gift was bestowed. But as early as 3,100 B.C., ambassadors from Crete were already bringing silver vases as gifts for Egyptian rulers. The metal’s popularity has even influenced our languages and customs. A silver spoon has symbolized great fortune and privilege since the 17th century when the Spanish writer Cervantes cleverly acknowledged that not everyone was born with one in his mouth. The tradition of the “silver anniversary” dates back to Germany where it was customary to present a silver wreath to a woman after 25 years of marriage. 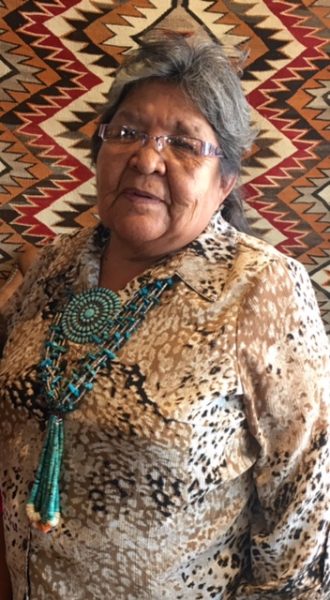 Award-winning Native American jewelry artist Virginia Tso grew up on the Navajo Reservation near Pinedale, New Mexico. At the young age of five, she began helping her parents and grandparents with their jewelry-making and at the age of 12, began making jewelry on her own. Her paternal grandparents were well-known jewelry artists whose last name was Silversmith.

Tso learned the art of silver bead-making by assisting her grandmother, who lived until the age of 108. Now with over 40+ years of experience in silver bead-making, Tso creates necklaces from hand-made beads in various sizes and shapes.

Tso’s high-quality craftsmanship has garnered her numerous prizes including First and Second Place at the Inter-Tribal Ceremonial Festival in Gallup, New Mexico.