3 Stone Kingman Turquoise Silver Cuff handmade by the amazing Wayne Aguilar. This striking cuff bracelet features kingman turquoise from the 1960’s set in sterling silver. The cuff is 1 1/2″ inches wide and the inside circumference is 5 1/2″ inches from end to end with a 1″ inch wide opening. 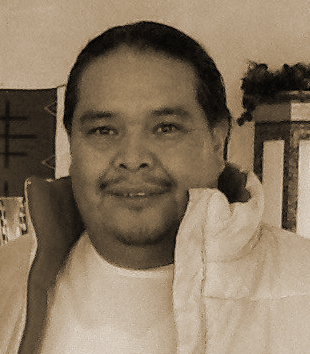 A native of the Santo Domingo Pueblo, Wayne Aguilar grew up watching his parents, renowned silversmiths Earnestine and Tony Aguilar working with brass, silver, coral and turquoise. Aguilar attributes his talent for unique designs and quality craftsmanship to the influence of his parents and to his Native American heritage.

I am blessed and successful because of my parents’ guidance,” says Aguilar.

Aguilar purchases rough stones from traders and miners, which he polishes and shapes. Working with sterling silver, he then designs and incorporates each stone into beautiful pendants, necklaces and bracelets. His trademark is to add one stone or bead of contrasting color on each side of a necklace or pendant.

The art of tradition passed down through generations from father to son, mother to daughter, keep alive the Native American treasures we enjoy today. In keeping with this multi generational flow is the craftsmanship of Wayne Aguilar. Deeply rooted in his spiritual and artistic heritage Wayne first began honing his craft at the age of 10 under the guidance of his parents Tony Sr and Earnestine Aguilar. Well known for their fine jewelry making techniques Wayne’s parents never pushed their son, rather gently tutored and mentored him. Raised at the Santo Domingo Pueblo, Wayne learned the spiritual path of the Kiva Culture which strongly influences his jewelry.

“My creations come from a spiritual place.  –Wayne Aguilar

He blesses each piece with reverence to his parents, his creator and the stones he utilizes. A legacy of turquoise and it’s power is incorporated into his impressive and imposing pieces. These works feel like ancient sacred amulets when worn, as if the strength and power of the artist is a specific gift to the wearer.