This Vintage Navajo weaving is a Storm pattern woven in 1917.

History of the Storm Design

The Storm rug style is distinguished by its design, not colors. This abstract design is supposed to contain the Navajo symbolism for a storm, but it is widely believed a trader in Tuba City developed and promoted it among local weavers, perhaps after hearing a Navajo legend, or possibly from a printed flour sack. It is the only rug style that purports to be an abstract portrayal of a natural event.

In the middle of the rug is a rectangle, representing the center of the universe. Four rectangles in the corners of the rug stand for the homes of the four winds or, by some interpretations, the four sacred mountains of the Navajo world. Zigzag “lightning” connects these with the center.

Storm rugs usually have a dark border that is often embellished on one side with geometric “teeth.”

The space between the main design and the border usually contains stylized elements, such as clouds and water beetles. Arrows, feathers, and geometric designs abound.

They used to pass out the papers and say: ‘you weave one like this,’…Grandmother that passed away, she never did copy one. She didn’t want the paper. She used to say ‘I’ll weave my own pattern’. –Mikes Daughter Frank, Jedito, Arizona

A Guide to Navajo Rugs 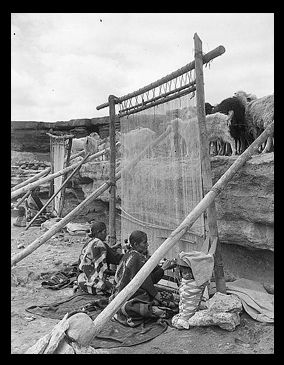